The Autonomous Province of Vojvodina is positioned in northern Serbia and it is located in the Pannonian Plain. It covers an area of​21,506 km2, which is 24.3% of the territory of the Republic of Serbia. According to the results of the 2011 census 1,931,809 residents live in AP Vojvodina (while according to estimates of the Statistical Office of the Republic of Serbia for 2013, the population is 1,912,095).

The largest city of AP Vojvodina is Novi Sad, with 341,625 residents. The second largest city is Subotica with 141,554 residents, followed by Pancevo, Zrenjanin and Sombor.

According to the 2011 census, the national structure of population in AP Vojvodina consists of more than 21 nationalities. The most numerous residents are Serbs, Hungarians, Slovaks, Croats, Romani, Romanians and Montenegrins. In addition to its multinational identity, Vojvodina is characterized by diversified composition of residents according to their religious affiliation. The largest number of residents are Orthodox Christians, followed by Catholic and Protestant Christians. A certain number of Muslims is present, as well as other smaller religious communities. Serbian, Hungarian, Slovak, Croatian and Ruthenian are official languages in AP Vojvodina.

Vojvodina borders Hungary to the north, Croatia to the west, Bosnia and Herzegovina to the southwest, Romania to the east and central Serbia to the south. It has a favorable economic position which is contributed by the fact it is a part of the Pannonian Plain. Due to its relief characteristics, Vojvodina is not an isolated geographical entity but is open in all directions to its closer and further surroundings which is an advantage of its position.

Three large navigable rivers (the Danube, the Tisa and the Sava) intersect Vojvodina and divide its territory into three units: Banat in the east, Backa in the northwest and Srem in the southwest. These units are divided into 7 districts (North Banat, Central Banat, South Banat, North Backa, West Backa, South Backa and Srem), 45 municipalities and 467 settlements.

Road traffic is predominant in the traffic structure. The most important roads are the European route E-70, or sections of the Pan-European Corridor X with the continuation from Belgrade to Vršac which borders Romania, and the route E-75, or sections of branches Xb (Belgrade-Budapest). The most intensive traffic in Vojvodina flows between the major regional centers, especially between Novi Sad and Belgrade-Pancevo.

A widespread network of inland waterways of AP Vojvodina is primarily based on the Danube, the Sava and the Tisa, as well as on the network of canals of the Danube-Tisa-Danube Hydrosystem. The Danube River, with its tributaries, is the most important waterway and the biggest hydro potential of Serbia and Vojvodina. Due to its economic and strategic importance, the Danube is ranked among priority Pan-European transport corridors - Corridor VII.

The economy of AP Vojvodina constitutes almost a third of the gross domestic product of the Republic of Serbia, while the gross domestic product per capita exceeds the national average. The most developed sectors of the industry include Manufacturing, Wholesale and retail trade and repair of motor vehicles and motorcycles, Agriculture, forestry and fishing, Mining and Professional, scientific, innovative and technical activities.

Vojvodina is the most important agricultural region of Serbia due to its high-quality soil types with high production values, the wealth of water and regulated water regime with a moderate continental climate. It covers around 1.75 million hectares of farmland, accounting for about 34% of the agricultural area in ​​Serbia, while ploughed fields and gardens encompass nearly half of arable land in Serbia. Vojvodina provides over 90% of the total production of sugar beet, sunflower and soybean in Serbia, and is famous for its production of grain and industrial crops. 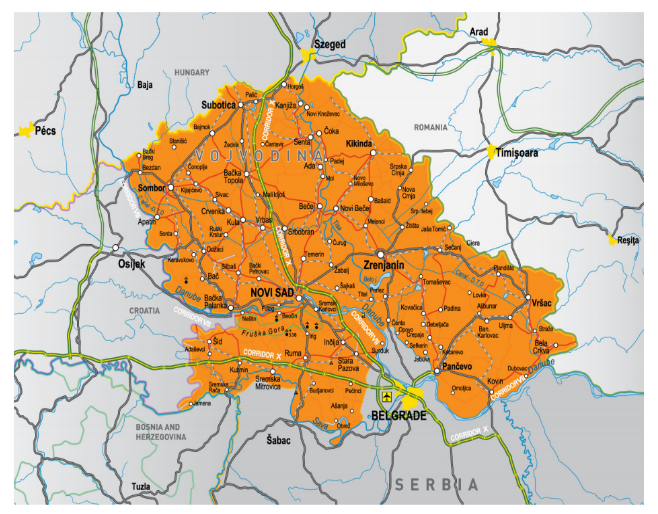